Monopolistic Utilities Know Renewable Energy Will Cut Their Profits, So They Stall It

From Truthout:  Please go here for the full story:

Last Friday, I wrote a commentary on a Hawaii for-profit electrical utility company that was taking new measures to dampen the selling (called "net metering" in the industry) of excessive solar energy back for distribution to other utility customers. The commentary was entitled, "Booming Solar Energy Halted by Hawaii Utility Because Sun Produces Too Much Power!"
The BuzzFlash at Truthout column was based on information provided in a Scientific American (no bastion of leftist bias) article entitled, "A Solar Boom So Successful, It's Been Halted: Photovoltaics proved so successful in Hawaii that the local utility, HECO, has instituted policies to block further expansion." Thus far, the BuzzFlash at Truthout commentary has received 11,000 Facebook likes and a lot of shocked readers.
However, there was a small number of alleged electrical engineers (and they may have very well been, instead of paid company shills which has become a common and legal practice in comments sections) who objected to both the Scientific American article and the BF/TO account of it.  They argued that "liberals" and "eco-types" don't know about how complicated and aged the electrical grids in the US generally are (although this was conceded in both the BF and Scientific American accounts).  That was the claim of the Hawaiian utility in question, HECO, which asserts on their website that they are avid supporters of renewable energy, just like Chevron or Shell does.

Posted by Unknown at 5:16 PM No comments:

Poison In Our Waters: A Brief Overview of the Proposed Militarization of Guam and the Commonwealth of the Northern Mariana Islands

The U.S. has long viewed the island of Guam, an unincorporated U.S. territory that already hosts two of the Department of Defense’s most “valuable” bases in the world, an indispensable part of its “Pacific Century.” Prior to talk of the “Pacific Pivot,” the Governments of Japan (“GOJ”) and the United States agreed to reduce the number of Marines on Okinawa in response to intense local pressure. Defense Department planning for Guam is closely bound up with changing plans for basing in Okinawa. In 2006, the governments of Japan and the US formalized a “roadmap” to move 8,600 Marines from Okinawa to Guam. The plan was contingent, however, on closing the dangerous Futenma Base and expanding an existing base at Henoko, an approach fiercely resisted by Okinawan people and politicians.


Go here for the full article:Poison In Our Waters: A Brief Overview of the Proposed Militarization of Guam and the Commonwealth of the Northern Mariana Islands
Posted by Unknown at 12:46 PM No comments:

UPDATE:Well, the dude made it bigtime!  He is named "person of the year" by  a Top Israeli Online Magazine That Names Edward Snowden “Person of the Year”

"Our home is a finite biosphere and we have passed the 59th minute!"

Are you too CHICKEN to eat chicken? Holy Moly, here we go again!

Consumer Reports has recently turned its independent testing laboratory to investigating our broken food production system with a report on the American poultry industry. The results of its testing are unsettling:
More here: Consumer Reports: 97% of all purchased chicken contaminated
How safe is that chicken? Most tested broilers were contaminated
and even more here:A A Improper use of antibiotics kills thousands and harms millions every year, CDC says Simple steps in the doctor's office and the supermarket can help keep you safe
Posted by Unknown at 9:10 AM No comments:

The financial sector has a lot to celebrate as 2013 draws to a close.

UPDATE: Volcker Rule Made Meaningless by Abundant Exemptions
The financial sector has a lot to celebrate as 2013 draws to a close. The banksters of Wall street have a lot of good news to dance about starting with the gutting of the so-called Volker rule! Some say that because the banks are tasked to "self report" violations and can treat other banks as "clients" rather than as institutions that fall under more strict regulations that the rule is fatally flawed.

1.) More questions than answers: The Volcker rule From the Economist:

Daniel Gallagher, a dissenting member of the Securities and Exchange Commission (SEC), one of the five agencies that approved the rule this week, complained that he and his colleagues had been given only five days to review the revised draft of the rule before deciding on it. “All we can say for sure is that the final rule set jettisons scores of flawed assumptions and incorrect conclusions in favour of new, unproven assumptions and conclusions,” he noted dryly, calling its hasty adoption “the height of regulatory hubris”.

From the NYT: Finally, the Volcker Rule

The success of the Volcker Rule, unveiled this week, depends on federal regulators doing what they failed to do in the run-up to the financial crisis and have done only haltingly since then: Enforce the spirit as well as the letter of the law against the wishes of powerful banks.

LONDON—The Asset Owners Disclosure Project (AODP) asked the world’s thousand largest asset owners what they were doing to guard against the possibility that their investments in fossil fuels could, in future, become worthless. Together, the owners manage more than US$70 trillion of funds. The Project found that only 27 of the 460 investment funds replying to its request are currently addressing climate risk at what it considers a responsible level. Only five of the 460 achieved the AODP’s top AAA, with an additional 29 rated A or above. Only these groups, says the Project, “will survive a carbon crash in any kind of good shape”. . Of the 1,000 asset owners approached, 80% are either D rated (abysmal) or X rated (doing nothing). A further 540 funds did not disclose sufficient information to allow a rating.

3.) A Government of the Billionaires, for the Billionaires, by the Billionaires 4.) Are Economic Royalists Leading the US Over a Precipice? 5.) When Lenders Sue, Quick Cash Can Turn Into a Lifetime of Debt 6.) Let's Get This Straight: AIG Execs Got Bailout Bonuses, but Pensioners Get Cuts 7.) Three Ways the Super-Rich Suck Wealth Out of the Rest of Us 8.) Iceland Sends Four Bank Bosses to the Slammer 9.) The Pension-Busters' Playbook 10.)And as a final insight you might like to take a look at this video.
Posted by Unknown at 6:49 PM No comments:

Photo courtesy of Kim Horsevad, teacher at Hjallerup Skole in Denmark.
Posted by Unknown at 9:47 AM No comments:

Posted by Unknown at 9:27 AM No comments:

More Fukushima News and a calabash of other stuff....

Posted by Unknown at 6:27 PM No comments:

What is this SECRET TRADE DEAL CRAP?


"The United States, as in previous rounds, has shown no flexibility on its proposal, being one of the most significant barriers to closing the chapter, since under the concept of Investment Agreement nearly all significant contracts that can be made between a state and a foreign investor are included," the memo reads. "Only the U.S. and Japan support the proposal."
Under NAFTA, companies including Exxon Mobil, Dow Chemical and Eli Lilly have attempted to overrule Canadian regulations on offshore oil drilling, fracking, pesticides, drug patents and other issues. Companies could challenge an even broader array of rules under the TPP language. 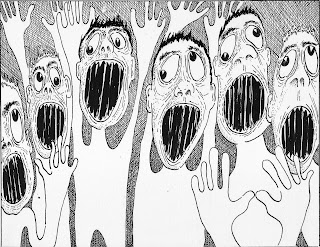 Posted by Unknown at 7:04 AM No comments:

Like a drip from a toxic faucet: Fukushima Cesium in North Atlantic Ocean Fish?

UPDATE:Measuring Fukushima Radioactivity in the Ocean: Why does it take so long?


A recently published study by Kanisch and Aust of the Thünen Institute of Fisheries Ecology in Hamburg reports that Fukushima sourced cesium (Cs) has been detected in fish collected in the north Atlantic Ocean. Like fish sampled thus far in the north Pacific the contribution of Cs to overall exposure of human consumers to radiation by consuming these fish is very small. In the Atlantic given that only modest atmospheric deposition of Cs has occurred radiation from Cs isotopes to human fish consumers is 26000-fold lower than the naturally occurring isotope polonium-210.  The authors conclude that the typical consumption of 10kg of affected fish per year: "...is not expected to cause concern according to present guidelines for radiation protection."

Good Resource:  National Oceanic and Atmospheric Administration US Department of Commerce Anthropogenic Radionuclides in the Marine Environment: A Selected Bibliography

Posted by Unknown at 9:36 AM No comments: